Publisher Jeff Patchell recently caught up with columnist Jerry Tyrrell to discuss how his acceptable Construction practice diagrams can be seriously embraced by the industry and benefit the sector on a national scale.

Let’s begin with some background on our driver first. Jerry is the founder of the Institute of Building Consultants and co-founder of NSWs largest property inspection service – Tyrrells Property Inspections.

The multi-skilled Jerry has carved out a distinguished career at the functional (doing) end of the sector with more than 43 years’ experience as a labourer, tradesman, contractor, architect, mediator, building consultant and author. He also has strong opinions and is not afraid to voice them. For anyone entering the sector, an hour with Jerry would be worth its weight in gold.

For the past 10 years’ Jerry has diligently shared his wise knowledge through the pages of Building Connection via his well respected CPD Academy column.

The move by government to make the National Construction Code (NCC) available for free online last year was very welcome; however, while it provides greatly improved access, it doesn’t necessarily improve the understanding of these complex series of documents.

Too many practitioners only learn about the detail once they are in a court room.

Frustrated with the amount of paperwork and reference material that sits behind the NCC and Standards (meaning no-one has the time or inclination to really understand them), Jerry has, in recent times, started turning those thousands of pages of information into logical diagrams that dramatically simplify things for the average practitioner. He has also overlaid his years of experience as commentary on top of the functional requirements of the NCC and Standards.

Jerry calls these graphic-based diagrams Acceptable Construction Practice summaries or ACPs. We’ve been publishing a number of them in recent editions of this magazine. 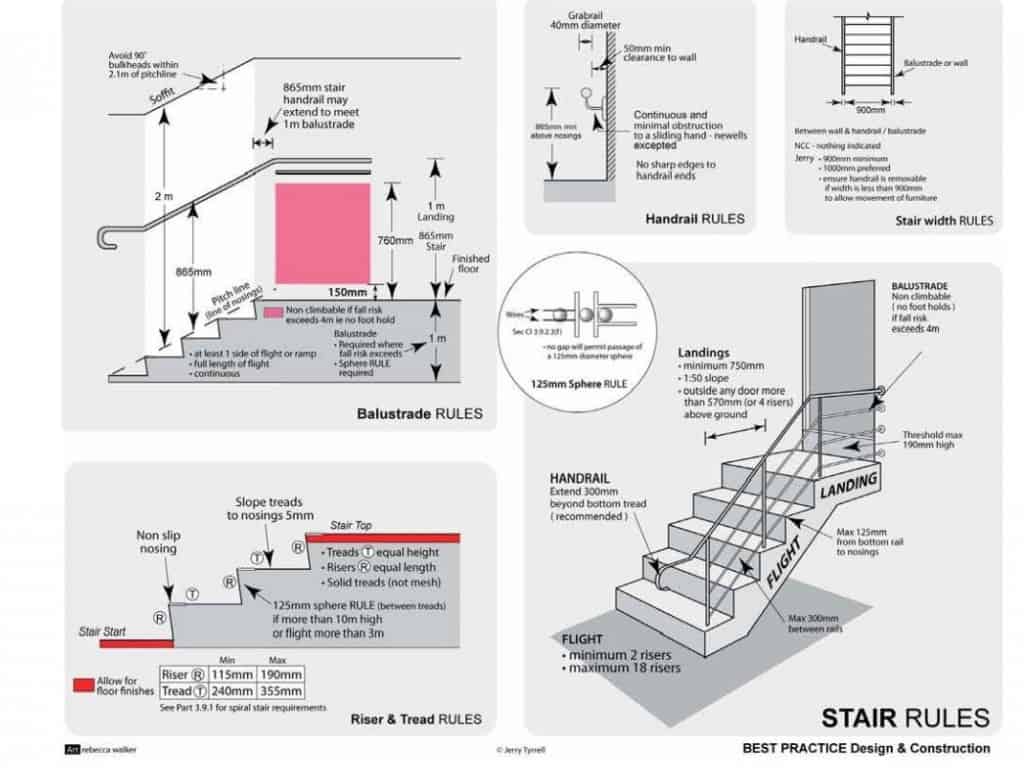 Above is an example of one on stair building that has proved popular.

I put a few questions to Jerry about his progress to get the ear of the industry.

Jeff: Jerry I’ve always admired your activist approach to solving building industry issues but does lethargy remain the big one that is too big to overcome with this ACP project?
Jerry: If it was easy, of course it would have been done by now. I chose to commence this task knowing that I needed to bring the industry with me to eventually complete it. Obviously it takes very detailed works to interpret and complete these ACPs to ensure they are correct.

Jeff: It’s obvious that at this time in the building cycle, getting things right the first time is more important than ever. Can ACPs play a role in achieving this?
Jerry: With the industry currently stretched to the seams in most areas nationally, I and most others I talk to fear there is more poor workmanship happening as we have less qualified labour doing the work. To make matters worse, there is less supervision and pressure on charge-out rates/margins. However, most stuff ups in our industry are unnecessary and preventable.

Jeff: So what’s the cost to the nation?
Jerry: It’s huge and I don’t think anyone is keen to quantify it. When things go wrong they are excessively expensive to solve and fix. Designers, certifiers, engineers and contractors are overwhelmed by the confusing mess of standards and codes they have to use. The Australian Building Codes Board has started to help us build better, faster and with improved profits. But it is all about Best Practice and how solutions can be easily understood and found quickly for every part of our work. And the same information should be available to, and used by, each professional group.

Jeff: I mentioned earlier about industry lethargy, are you seeing any improvement?
Jerry: This is the first year I sense positive change is happening in a number of ways. I’m seeing manufacturers and industry groups describe what they make and do more clearly and concisely. I’m seeing summaries and useful diagrams in the likes of Building Connection by some of your excellent contributors like Peter Coll’s article on box gutters and Gary Busbridge’s article on LED light types that told readers exactly the maximum permissible temperature and where a light can be covered using neat pictograms.

Jeff: Those small contributions are important (and greatly appreciated) but the reality is, this effort is all a bit too slow. In an industry that accounts for 8% of Australia’s gross domestic product (GDP) and employs 950,000+ people the industry needs a shot up the backside as only one person (you) is putting their mind to this important nation building matter.
Jerry: I’d certainly rather not be a one-man band but the reality is that to date I have put in some thousands of hours of my own time and if I was given a choice I’d rather put my pro-bono efforts into my favourite charity, the Salvos.
On the other hand, everyone who sees these ACPs reckons they’re the best thing since sliced bread – so I reckon it is about time I saw some energy coming from within the industry to support my efforts. That means lobbying governments and your associations to push this along.

Jeff: I recall that after you presented your ACPs at the ABCBs Building Australia’s Future conference in Queensland last September, you had a number of people put up their hands to be involved in the technical editing process, is that still the case?
Jerry: Yes it is and I’d also like to think that the likes of the ABCB could, over time, audit some of our ACP content, but I realise they have many issues on their plate. What is needed overall is a starting point by government/industry that acknowledges the situation.

Jeff: Money talks all languages and that’s obviously what is needed here, how do you raise that?
Jerry: Perhaps we need to be adventurous and look to something like crowd funding in order to pay for a group of people to research all the tedious, long-winded, poorly written stuff in order to give me summaries to illustrate.

Jeff: So what’s the size of the task?
Jerry: I’ve identified an initial target of 69 ACPs needed; however, that is one man’s opinion and I’m open to suggestions. But I am confident that the diagrammatic formula I’ve devised for the ACPs is right and has been well-tested by a panel of others that I respect.

Jeff: So where to with the project from here Jerry?
Jerry: Firstly let me acknowledge that the ABCB is working towards improvements but the reality is harsh: the 20,000 pages in the three volumes of the National Construction Code and the hundreds of referenced Australian Standards remain in the way. The base story is great the first time… but after that? We need best practice and we can get this with the ACPs by making them freely available to all in both electronic and print form. As an industry and nation we will save time, avoid mistakes and have better performing buildings. And don’t underestimate the fact we can increase profit on every job we undertake. 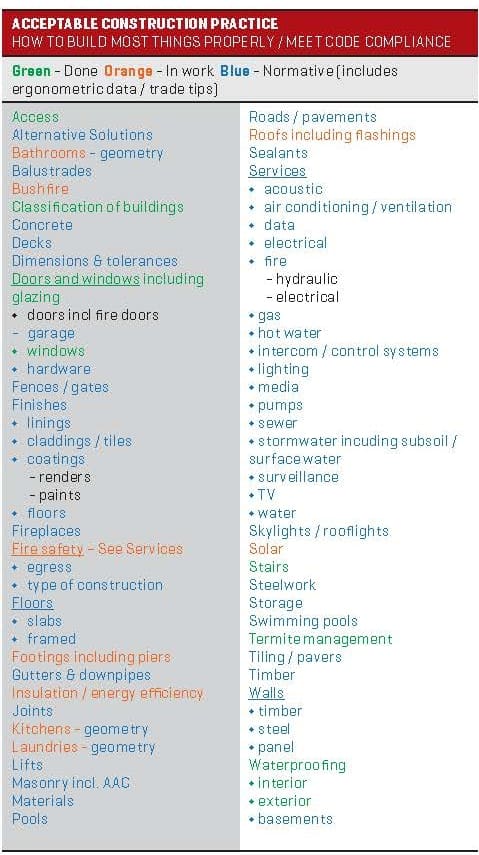 To join Jerry’s road trip to best practice communication, send him your thoughts and experiences to: jwtyrrell@tyrrells.com

The Case of Terrorised Builders