News
Home›News›Carpentry as a community

Carpentry as a community

A new industry organisation specifically for carpenters is aiming to fill a void, and set a consistent standard for carpentry work across Australia. Darcy Wilson reports.

Carpentry has, for quite a while, stood almost alone in Australia among similarly common trades as an industry without strong, unique representation.Unlike builders, plumbers, electricians, landscapers, building designers and countless other building trades and professions (many of which have more than one national organisation competing for the right to represent them), for a very long time there hasn’t been a dedicated national membership body specifically representing the interests of trade-based carpenters.

Generally speaking, membership with an industry organisation like Master Builders Australia (MBA) or the Housing Industry Association (HIA) has been the only option for carpenters.

One group is now looking to change that though, and has established Carpentry Australia – a membership organisation exclusively for carpenters, which is working to bring the industry together and represent its collective interests, and generally to maintain and improve standards of carpentry work in Australia.

To be specific, Carpentry Australia’s stated goals and ambitions are:

– To deliver ongoing and relevant support to its members
– To provide benefits to both members and consumers through the application of the Carpentry Australia Code of Conduct, and
– To lobby on behalf of all carpenters, raising awareness and encouraging greater recognition within the industry.

Creating realistic expectations
Jake McArthur, who’s both a qualified builder and an experienced carpenter, is the founder and director of Carpentry Australia.

“Having a carpentry background and becoming a builder, I’ve been able to see all of the issues associated with being a chippie and starting out in business and the various things that come along with all of that,” explains Jake.

“What I found was some real inconsistencies in the expectations of the carpenters and the end users of those tradesmen. I guess I got to a point where I thought that there needed to be some clear-cut direction. There seems to be some movement towards licensing for carpenters (depending on which state you’re in), but it can never really get to full momentum,” says Jake. 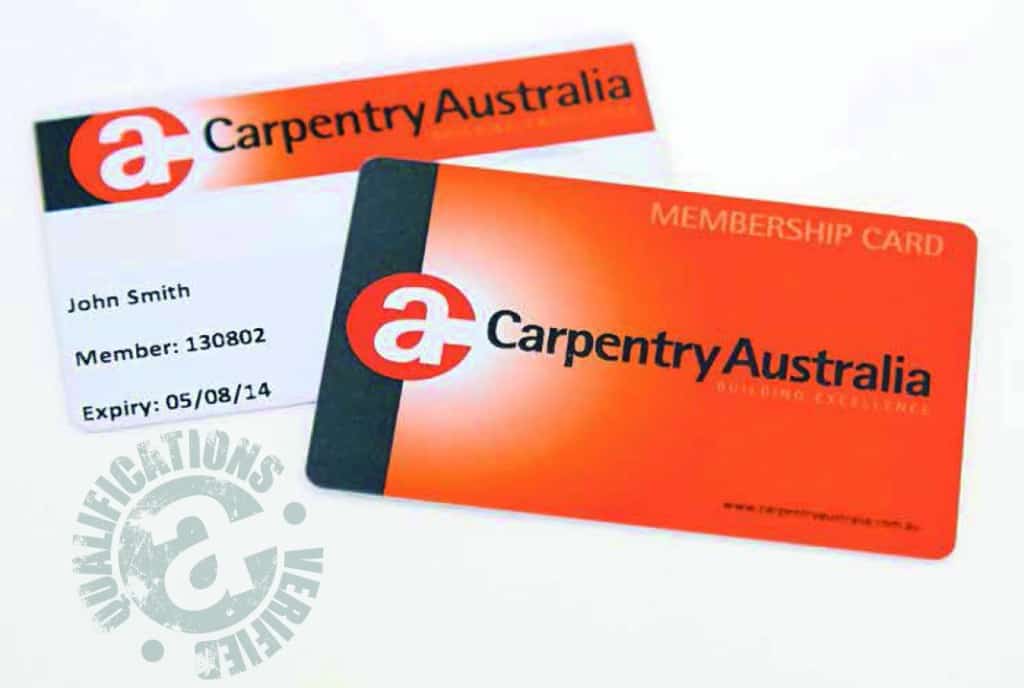 The lack of a specific organisation for carpenters has lead to a situation where, according to Carpentry Australia, people don’t properly understand what they should expect from carpenters – and also where carpenters themselves aren’t getting the kind of support and recognition many other trades and professions benefit from in Australia.

“It’s important for the carpenter to understand what they should be providing as a service – understand what their expectations are,” says Jake. “We’ve had countless carpenters come through our organisation’s doors at different times and there have been vastly different standards and expectations, and understandings of what’s right and what’s wrong… so the purpose for Carpentry Australia is to unite everybody, have a common understanding, a common goal.”

Unifying standards and practices for carpentry under a common banner is seen very much as a way to help instill confidence both in consumers, and in builders hiring carpenters as well.

“One of the key things Carpentry Australia aims to do is provide a membership card that gives a clear distinction between somebody that’s qualified or carrying out legitimate trading and someone who doesn’t come with a qualification but who purports to be a craftsman.

“Because there are so many aspects to carpentry, anybody can throw a toolbelt on, turn up and do some handyman work, and quote for a job … it might not be technically correct, but there’s nobody overseeing it or policing it and that creates long term problems for the industry,” Jake explains.

“What we try to do is set a standard for these guys to work towards with a simple code of conduct. We do a check to see that they’ve got their legitimate qualifications and with those few simple things, there’s a distinction made.

“The guys that’ve actually had proper training and are committing themselves to ongoing improvement, they can show that with the card. The builder or consumer can do an online lookup – they don’t need to see their paperwork – because we’ve done that – so they can tell who’s qualified and who’s not straight away,” Jake says. 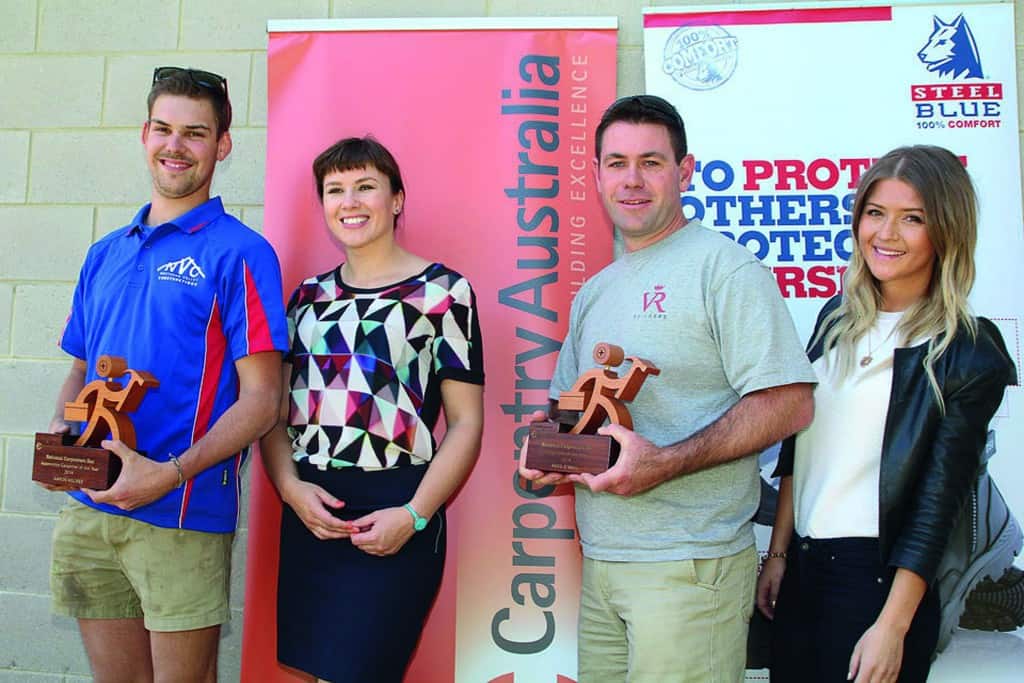 By carpenters, for carpenters
While many carpenters currently have memberships with the Housing Industry Association (HIA) or the Master Builders Australia (MBA), Carpentry Australia seeks to provide representation, support and benefits that are more specifically tailored to the needs of carpenters.

“I think they’re fantastic organisations and I’m a member of the MBA myself,” says Jake, when asked about the HIA and MBA, “but at the end of the day Carpentry Australia has been specifically set up to support carpenters from the day they begin their apprenticeship to the day they retire.

“We’ve structured our membership fees to make sure everyone can easily access what they need. These guys are struggling – it’s not easy out there in today’s challenging business environment, you know,” Jake says.

“Carpenters are doing it tough. They’re expected to do a lot and their rates are relatively low when you put them beside a plumber or electrician especially – but the expectations of what a qualified carpenter can provide and their knowledge is really quite high.”

“You find a lot of guys fall into carpentry – if you throw a rock you’ll hit a young kid who wants to be a builder eventually and the natural course for that is to become a carpenter first and lead into building. When they step into the training to become a builder and do the extra courses, they tend to learn the information that really they should have when they’re starting out in carpentry.

“With the electrical and the plumbing trades, those guys come out with an understanding of business that’s far higher than what the average carpenter has at the moment, so we’re looking to change that,” Jake emphasises.

What’s in it for carpenters?
Beyond broader advocacy for the interests of carpenters in Australia, the organisation provides a range of direct benefits for its members.

The first is a membership card which carpenters can show to prospective clients as proof of their qualifications and membership with Carpentry Australia.

Membership involves a vetting procedure (as discussed above), so the card is intended to act as an assurance to clients of professionalism and good conduct. Members also have access to the Carpentry Australia logo to use on their resumes, on written quotes, on websites and on other marketing materials.

While we’re told it’s a little too early in the piece for the organisation to be offering its own CPD regime or in-house training, Carpentry Australia does provide both access to training support and direct advice to its members wherever it’s needed.

“We act as a reference centre,” says Jake. “We’ll provide direction to these guys on where they need to get the training they need to – above basic information that we can provide”.

“I’ve committed myself to making sure that this has got legs for the long term. I think that there’s been various initiatives come along that haven’t lasted the distance, which have come and gone but this is something that needs to stay.”
Another advantage to membership with Carpentry Australia is that it offers access to significant discounts on training, products and relevant resources for its members.

“Apprentice members and teachers can apply to get their membership for free, and fully qualified carpenters can pay from as little as $99 for their membership”, explains Jake. “It comes with financial benefits that’ll pay for that five or six times over through discounts.”
Carpentry Australia members are also provided with access to new work leads that come through the organisation, both from consumers and from builders. Premium members will have priority access to these leads.
All members also receive periodical industry news updates, and access to discounts from affiliated suppliers.

What’s required to join?
Recognised carpentry qualifications and the necessary state licenses are required by all members of Carpentry Australia, and they’ll need to be provided as a part of the application process.

Likewise, as a condition of membership, Carpentry Australia members are expected to comply with a basic code of conduct – the spirit of which is aimed at ensuring that members conduct their business honestly, fairly and legally.

Membership is free for apprentices, and membership packages for fully qualified carpenters range from $99 to $495 for a 12 month subscription.

While the organisation is based in Melbourne, Carpentry Australia has already attracted members from most states and territories across Australia. “Our main coverage at the moment – the bulk of our members are in Victoria. We’re looking to push heavily into NSW and the ACT later this year,” Jake explains.

“If we can get some major builders on board that are also spruiking the same things and maybe will only consider taking on carpenters that are members of ours, I think that will go a long way to drumming up some extra support.”