Fire spalling can drastically reduce the fire resistance of a concrete structure. During a PhD study, significant differences in spalling behaviour of concrete were found under different test conditions. Robert Jansson from the SP Technical Research Institute of Sweden’s Fire Research Unit explains.

Fire tests are performed to assess the risk of fire spalling and its influence on fire resistance.

Concrete can spall in two ways
Fire spalling of concrete can be described as either:

The flaking process can range from spalling the outer millimetres of the surface to (in more severe cases) a continuous flaking until the whole cross-section is lost.

Fire resistance concern
Concrete has a relatively low thermal conductivity and high density, providing good insulation for reinforcing bars. Protecting the reinforcement is important to maintain the load bearing capacity of the concrete member. Any reduction in cross-section due to fire spalling could, potentially, significantly reduce the fire resistance.

Some limited effects from fire spalling are included in current design guidelines for the fire resistance of concrete. However, the development and use of more dense concrete mixes are now producing cases of very severe fire spalling.

In tunnels, for example, severe spalling of concrete has been reported that was not included in the initial fire resistance design. This is increasing the urgency to understand why and when this happens so it can be avoided.

Test methods are important
This study showed the test method used has an important impact on the fire spalling depths and concrete performance. More realistically sized test specimens and load situations will produce more fire spalling, if it is occurring, compared with tests on smaller specimens with less load or restraint. It is clear that the fire spalling of concrete cannot and should not be treated as a pure material property.

Some test conclusions dubious
Despite this, the scientific literature includes many highly doubtful conclusions on fire spalling based on tests on small specimens that are not used in real constructions, with the size and load effect omitted.

In one test series, the results from tests on unloaded cubes did not correspond to results on larger loaded slabs – none of the tested cubes spalled whereas some of the large slabs spalled to the degree that the reinforcement became exposed.
Also, the difference in spalling depths during fire testing of small and large post-tensioned slabs was shown to be substantial. Although testing many concrete mixes with both configurations found that the ranking in severity from least to greatest spalling was generally the same, the severity was less for the small configuration. 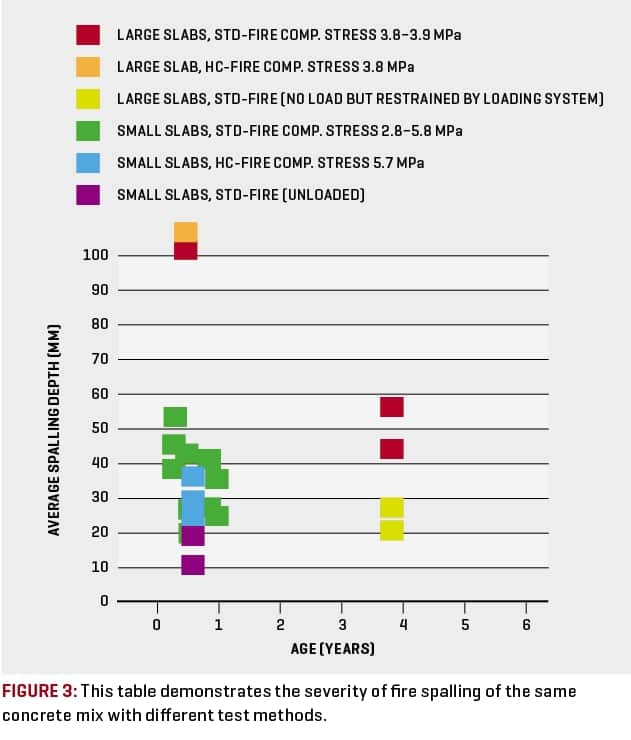 The small, unloaded slabs of one of the mixes in the tests spalled less than 20mm, whereas the larger loaded reinforced slabs lost 100mm or half their cross-section (see Figure 3).

Similar measurements for another concrete composition in the test series showed no spalling for the unloaded small slabs, while the large loaded slabs spalled 40mm.

A spalling depth of 40mm leads to direct exposure of the reinforcing to fire temperatures that will devastate the load bearing capacity of the structure during a fire.

Adding fibres
To reduce the amount of fire spalling, thin polypropylene fibres can be added to the concrete mix. In the Eurocode EN1992-1-2, an option is to add at least 2kg/m³ concrete to combat spalling. Research results show that even substantially lower amounts of polypropylene fibres, around 0.5 kg/m³, can significantly reduce the fire spalling propensity of concrete specimens.

For more information, interloan the thesis Fire spalling of concrete: Theoretical and experimental studies from the BRANZ library, or see www.diva-portal.org/smash/record.jsf?pid=diva2:647411&rvn=1.

This article was republished with permission from the New Zealand magazine Build 142 (June/July 2014), copyright BRANZ. We hope that the general nature of information in the article is useful to local builders.

Do you need a written ‘project’ contract?

Are you buying a business or a ...