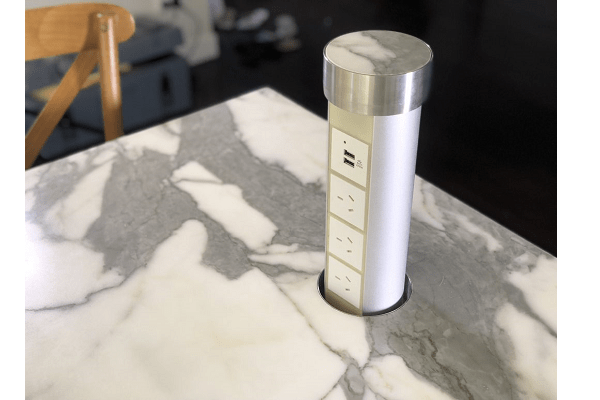 A builder-turned-entrepreneur has developed Point Pod, a product that aims to solve the problem of not having enough power outlets in your kitchen, by hiding a pop-up unit beneath your bench top.

Users press press the top of the unit, and power points and USB sockets emerge for use. But unlike other power options, it blends into your bench top, so it doesn’t comprise the design of the kitchen.

Point Pod was designed and developed by Brisbane builder, Cameron Singer, who was frustrated with the limited options on the market.

“I developed Point Pod two years ago out of my own frustration of the limited power options available,” Cameron says.

“After renovating my own house, I was disappointed with what was available to improve access to power for my island bench.

“Point Pod units give functional space when you need power at the bench, without compromising the aesthetics of your bench space.

“I believe so much in this product, that I’ve decided to give up my building business to fully pursue bringing this to the market. It’s taken me two years to get it ready, and now we’re about to launch it.”

“I’ve started spreading the word at trade shows, and I’ve been quite overwhelmed by the response. I knew there was a need for a product like Point Pod, but it’s become clear that it’s something people have been looking for,” Cameron says.

Point Pod will be marketed through cabinetmakers, kitchen companies, architects and interior designers as well as being promoted at trade shows. The units are designed for any space where you would use power on a bench top, including the kitchen, bathroom, office and boardroom.

“Point Pod is waterproof and robust and meets all Australian Standards as well as stringent in house testing,” Cameron says.

“Point Pod is a company dedicated to exceptional design. I started Point Pod to deliver products that are driven by what the market wants for functionality, whilst addressing the aesthetics of the environment.”