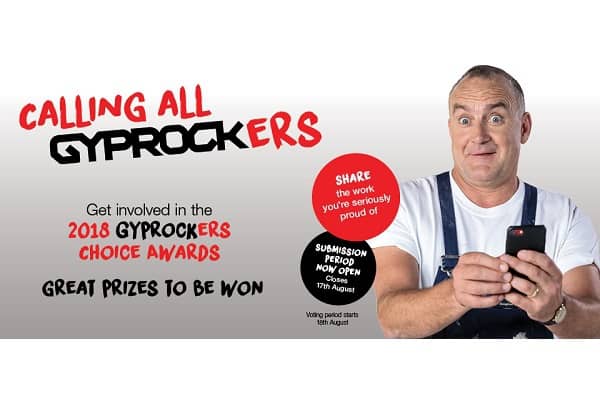 CSR Gyprock has announced entries are now open for the 2018 Gyprockers Choice Awards, which give Gyprockers across Australia a chance to share projects they’ve been part of and recognise the work of their industry peers.

Three awards will be issued in each of the six award regions – Queensland, Victoria, Tasmania, Western Australia, New South Wales and the Australian Capital Territory (ACT) – as well as South Australia and the Northern Territory.

Category winners from each region will receive $1,000 in cash and store credit, along with a Gyprock merchandise pack.

“As the leading brand of plasterboard in Australia, we’ve launched the 2018 Gyprockers Choice Awards to celebrate the industry and the craftsmanship that follows,” says CSR Gyprock general manager of marketing Najwa Khoury.

“The Awards will allow plasterers to share their own work on a national level as well as vote for the quality work of their peers. We saw this as an opportunity to give back to our loyal customers and showcase different ways Gyprock products can be used.”

Projects can be submitted here between 2 July and 17 August 2018. Individuals can submit their own project or someone else’s as long as the nominated project has been completed after 1 July 2017 and used Gyprock plasterboard, cornice and compounds exclusively. A minimum of three project photos must be submitted.

Gyprock will review submissions and publish all approved projects on the Gyprock website, ready for public voting, which will be open from the 18 August to 7 September. Winners will be announced in November 2018.