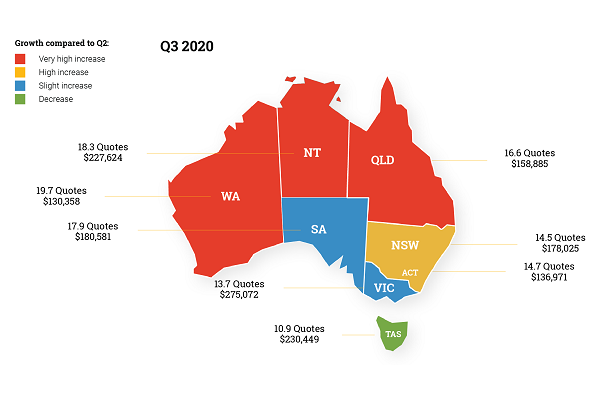 Small residential builders in Australia continued to experience strong demand for new builds and renovations in the September quarter (Q3) of 2020 despite a COVID-19-related slowdown in Victoria, according to data from residential construction management software company Buildxact.

This growth is not only good for the many builders, but the broader construction industry. Based on an average number of jobs won per small residential builder of 17%, the $5.6 billion of quotes over Q3 is expected to convert to $952 million of new project work. Of this, approximately 40%, or $381 million, flows through to hardware purchases.

Building supplier Dahlsens chief executive Geoff Dahlsen says that for the most part, the builders are faring well during the pandemic, especially those in regional areas.

“The change to remote working has created a ‘flee change’ where people are fleeing the cities and moving to regional areas,” he says.

“Their money can go further here, so people are buying existing houses and renovating. The HomeBuilder grant has had a positive impact, and now the low interest rate has created more incentive for people to get into the market, so I’m confident we’ll continue to see strong demand for the next six months.”

The average value of quotes over Q3 2020 rose in July and August and hit a peak for the year-to-date in September, at $175,711 according to Buildxact.

“There’s so much demand out there that some small residential builders are being run off their feet. Our subscriber numbers continued to rise during the September quarter, but it’s still well outpaced by the growth in demand,” David adds.

“As people have been restricted with domestic and overseas travel and are needing to spend more time at home, many are choosing to put their holiday budget towards renovations and home improvements instead.

“Growth in profit margin suggests that builders have sufficient work and are not under pressure to reduce prices. Profit margin is also helped by the fact that there is more demand for renovations than new builds. Renovations attract a higher margin.”