Beware the sound of drums

Tiling installation defects can seriously detract from the overall finish of a job and result in extensive, painful rectification costs for builders. If you’re challenging a tiler over a sub-standard job, this article will arm you with some sound knowledge to help your cause.

Drummy or hollow sounding tiles are an ominous thing. They often lead to scenes involving jack hammers, grinders, painters, dust, mess and moving trucks. As a finishing trade, sub-standard tiling can have a huge impact on how the overall job’s perceived – poor tiling will often lead to unhappy clients, costly (and sometimes lengthy) disputes, and further expenses and wasted time for rectification work.

DEFECTS: TYPES AND CAUSES
Tiling defects fall into two main categories: functional failures and cosmetic defects. Functional failures are the more serious of the two, but cosmetic defects are likely to create the most angst – particularly where the owner’s expectations are high. Polished, large format tiles are expensive, and minor defects are often painfully evident – the expectation is usually for a surface like a large, flawless mirror.

Cosmetic defects offer another problem; in some cases, they affect the overall service life and performance of the tiling system.

A number of minor defects have been recognised as significant in this respect, and have been included in AS 3958.1-2007 (Guide to the Installation of Ceramic Tiles). The Standard prescribes tolerances to accommodate for joint size and alignment, levels and lippage.

Joint size is fast becoming a regular offender, and ultimately has influence on the movement tolerance of the tiling system. The minimum grout joint size for dust pressed floor tiles is 3mm, and NOT 1.5mm, as is common practice with rectified edge floor tiles. Grout joints allow for size variances, but they also provide for independent movement between individual tiles. This function becomes ineffective where tiles are touching at the base of 1.5mm and smaller joints. Smaller joint sizes also compromise the spacing and function of effective movement joints. 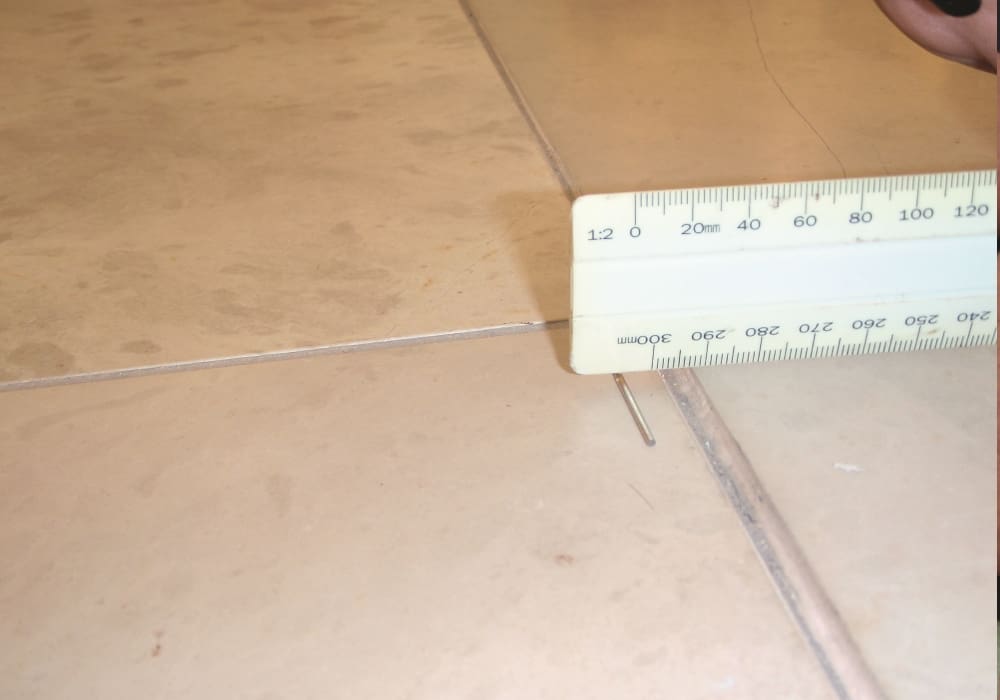 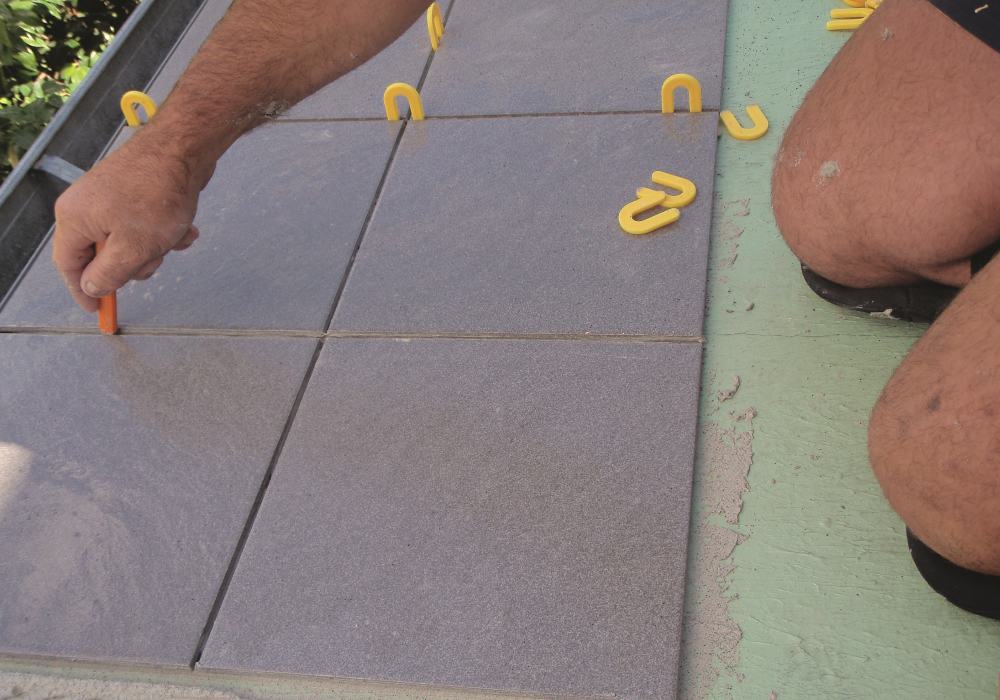 Joint alignment and levels are required to be within ±4mm over 2m lengths. 8mm deviation over this distance is certainly noticeable to the naked eye, and visibly detracts from the overall finish. Care must be taken with the preparation of substrates, and appropriate levelling compounds should be applied where they’re required. Large format tiles (600mm, for example) do not bend. For that reason the substrate needs to be true, with minor levelling being achieved with the application of thin bed adhesive.

Lippage isn’t a word you’ll find in any English dictionary, but has made its way into AS 3958.1-2007. Lippage is where a vertical lip protrudes between two adjoining tiles. The Standard allowances are:

Lippage between rectified edge tiles appears more severe than it does between cushioned edge tiles, and it may constitute a trip hazard in floor tiling. Rectification often involves removing several surrounding tiles to address lippage between two adjoining tiles.

Cramping or levelling systems help to alleviate lippage defects – but care needs to be taken to maintain the required contact coverage. When they’re misused, tiles are pulled out of the adhesive during the levelling process, resulting in ‘drumminess’ around the edges of the tiles.

FUNCTIONAL DEFECTS
Functional defects are those where the building element doesn’t perform as intended and the continued service life is compromised. Where tiles are intended to be bonded to the substrate, and the adhesive bond has broken, this would be recognised as a functional defect.

‘Drummy’ or hollow sounding tiles indicate a bond failure. According to AS 3958.1, this would be considered a functional defect where 20% or more of any individual tile is ‘drummy’, or not bonded.

Bond failure defects are detected through resonance testing, where a metal tipped testing rod identifies any ‘drummy’ tiles. This testing rod will indicate, through pitch, whether the bond has failed at either the tile / adhesive interface, the adhesive / substrate interface, cohesively through the adhesive line, or within underlying screeds. 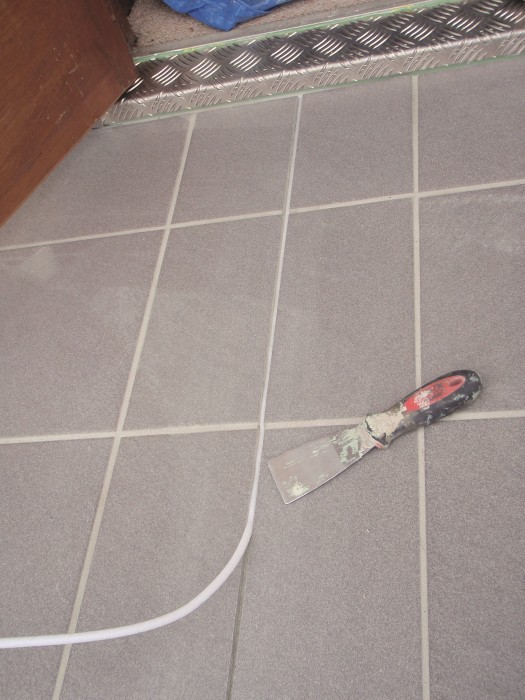 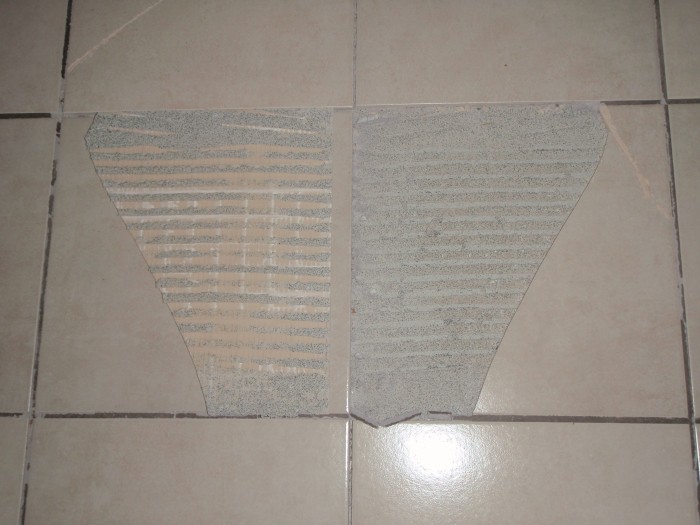 ‘Drumminess’ at the base of the screed may not be considered defective if tiles are bonded to the screed and the screed is of a solid and consistent composition. However, bond failures at any level through the adhesive strata are functional failures.
This is compounded in external applications, where de-bonded tiles retain excess, free standing water. These tiles are subjected to the steaming effect where stress is applied to surrounding tiles, resulting in further rows of tiles de-bonding. Each failed tile is, in effect, floating – and for that reason doesn’t assist in restraining surrounding tiles from de-bonding. This becomes an ongoing deterioration, both with internal and external tiling.

Excessive deterioration can require full tiling replacement – especially when replacement tiles are no longer available. If it’s identified early, this type of functional failure can be rectified using a tile reglue injection system, which will re-bond the tiles in situ without disturbing surrounding tiles. Only an approved system should be used, by licensed applicators, with the appropriate warranties. Tile reglue injection keeps cost and disruption times to a minimum and can usually be carried out while maintaining occupancy during repairs.

Although bond failure defects are predominantly the result of differential movement, poor laying practices are also key contributors. Bond failure will generally manifest three to five years after the tiles have been laid due to compounding substrate pressures, however where poor laying practices have been employed, ’drummy’ tiles may start to appear not long after installation.

A number of common breaches of AS 3958.1 and manufacturer’s requirements are often evidenced as contributing to bond failure defects:

Contact coverage
AS 3958.1 recommends 80% minimum contact coverage for internal main floor tiles, and 90% for external floor tiles and wet area wall tiling. This is achieved by ensuring a 3mm to 4mm finished adhesive bed thickness, with the required contact between the tile and substrate.

The correct sized trowel, back buttering of the tile and regular spot checks are essential. Anything less, either in contact coverage or finished adhesive thickness will drastically reduce tolerances to building movement. 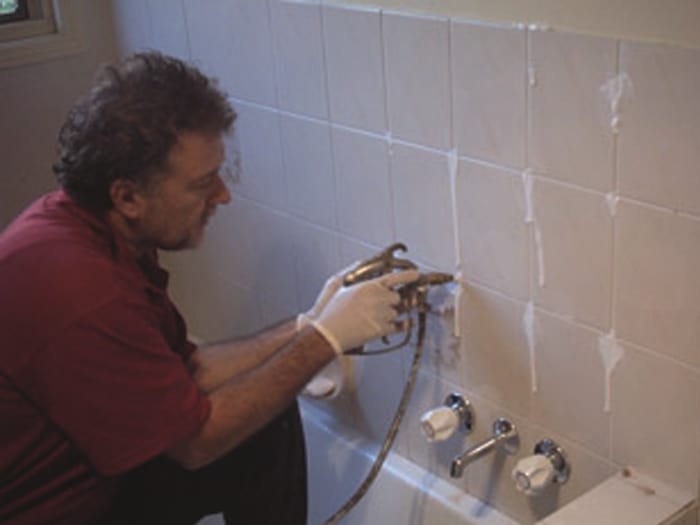 Reglue injection can be used to rebond tiles in situ.

Substrate preparation
All substrates should be assessed with respect to their suitability to accept a bonded hard finish. Substrates should be checked for flexibility, deflection under load, trueness of levels, contaminants (such as old adhesives), compatibility with adhesives and transferred movement stresses.

Once the correct specifications have been addressed, the tiler needs to clean the stinking floor.

Failure as a result of dust, chalk line residue and plaster droppings ranks fairly highly. Surface contamination doesn’t allow the adhesive to key onto the substrate. Brooming and vacuuming aren’t sufficient either – the substrate should be washed with clean water prior to priming with the specified product. Over-priming can result in primer separation, where primer residue will be evident on the substrate and also on the back of the adhesive. 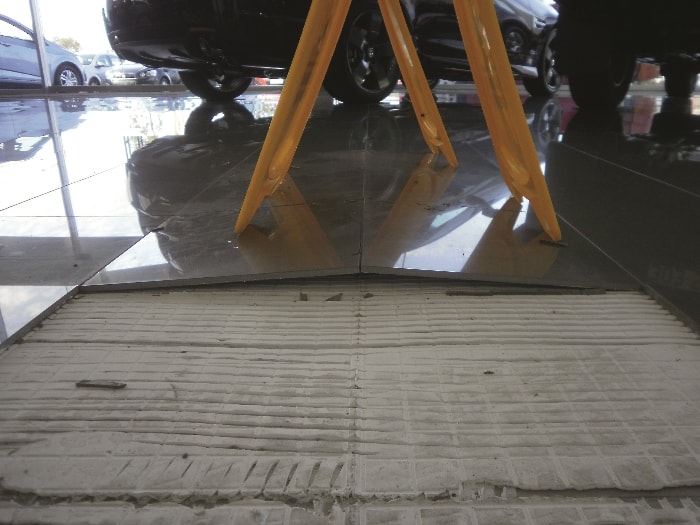 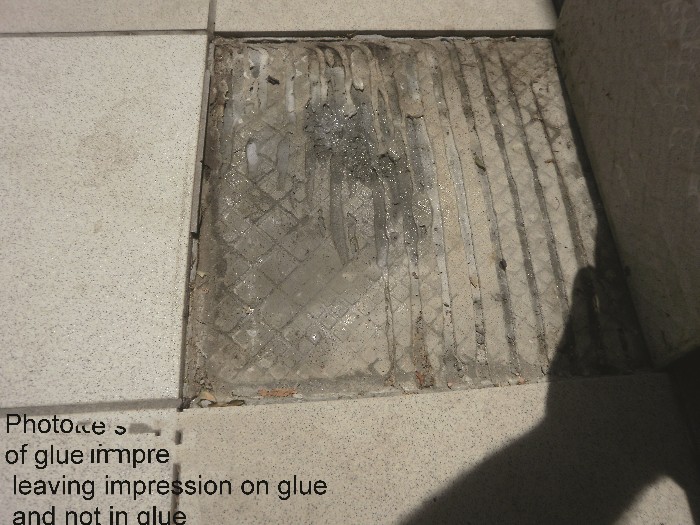 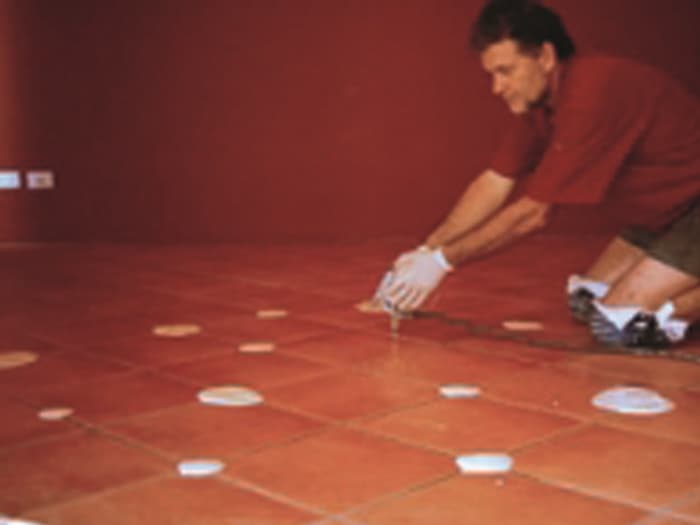 Movement joints
These are an intrinsic part of the tiling system. Effective movement joints separate tiling from constrictive perimeter surrounds; they accommodate transference from construction joints, and they isolate areas of tiling into apportioned bays, minimising cumulative stresses on the entire body of tiling.

Movement joints should extend from the top of the tile through to the substrate and should be filled with specified backing materials and joint sealants. Movement joints must be planned and marked out as part of the setting out process. It’s critical that movement joints are installed as the tiles are being laid.

Identified joints should be cleared of wet adhesive as the tiles are placed. This ensures the establishment of isolated bays when initial bonds are being formed and curing stresses are acting at the substrate/ adhesive/ tile strata.

Again – poor quality tiling finishes reflect badly on the overall quality of any project. They can be costly and disruptive after handover, and they should be minimised as part of quality control processes. Seek the manufacturer’s site specifications, select the correct materials and ensure that tile fixers are qualified and follow specs and AS 3958.1-2007.

When assessing finishes: LOOK at levels, joint alignment and light diffraction over uneven surfaces; FEEL for lippage and level tolerances; and LISTEN for ‘drummy’ tiles indicating bond and functional failures.

National Construction Code: free for all from ...