Many issues with corrosion could be easily avoided if its causes were better understood.  The following information gives an explanation of why corrosion often occurs in aluminium – and may help you to prevent it.

Although aluminium’s an extremely reactive metal, it stands up admirably against corrosion in most environments – this is down to its capacity to quickly form a surface barrier layer of aluminium oxide. This layer’s only a fraction of a micron thick, but provided that there’s oxygen available, it re-forms immediately if it’s damaged.

Crevice corrosion often occurs when a metal surface is exposed to a stagnant solution that’s become depleted of oxygen. Things like crevices, cracks and non-hydrophobic surfaces in close contact with each other all tend to stay wet much longer than exposed surfaces (which otherwise just to dry out in most situations). Because oxygen has a hard time reaching into nooks and crevices, certain conditions can quickly remove the oxygen from the stagnant solutions that get stuck in these crevices. 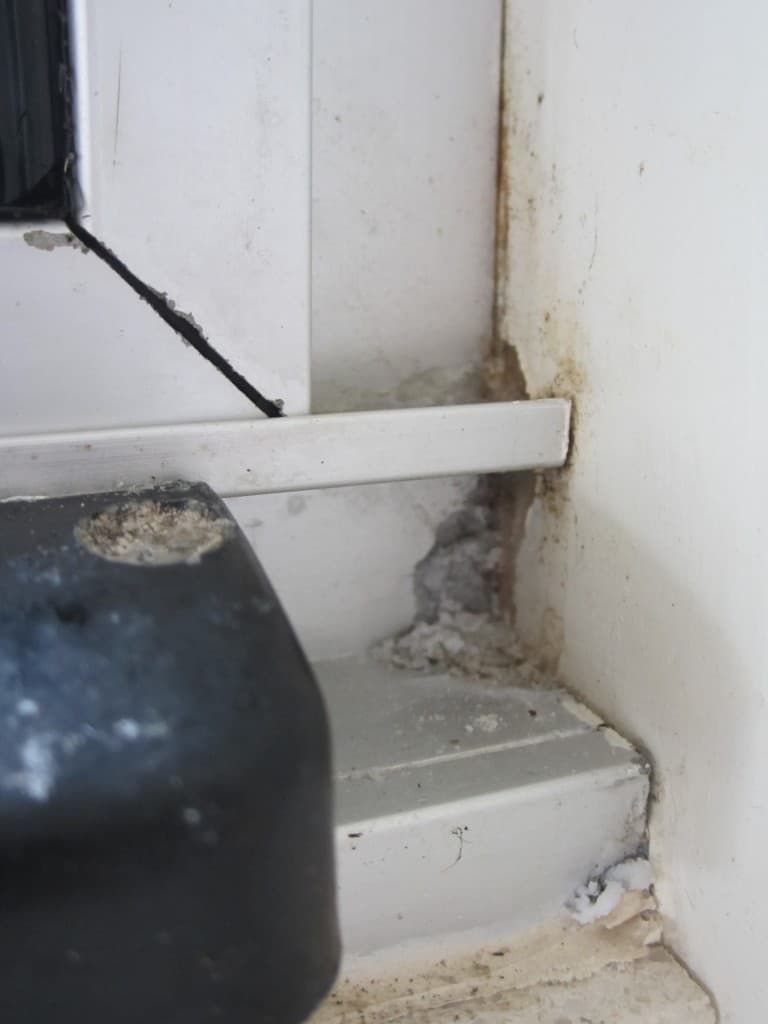 The outer layer of aluminium oxide which protects aluminium from attack is stable within a pH range of between about 4 and 8.5. Bricks, concrete and mortar (even after it’s cured) can generate highly alkaline waters with a pH of anywhere between 10 and 13 though. If waters like this with corrosively high pH level enter a crevice where there’s an unprotected aluminium surface (at a mortar/door sill interface, for example), the natural aluminium oxide layer becomes corroded.

A bit of a technical explanation if you’re interested in the chemistry: Under these types of conditions, the barrier layer of aluminium oxide which normally protects the aluminium corrodes, and aluminium ions begin to enter the stagnant solution creating a local net positive charge.

If there’s chlorine in the environment too, fast moving chloride ions are attracted into the crevice where they can react to hydrolyse the aluminium. The result is an aluminium hydroxide and free hydrochloric acid.

Both chlorine and hydrogen speed up the dissolution rate of aluminium, so the rate of corrosion increases. The build-up of corrosion product becomes a further barrier to oxygen diffusion, and aluminium chlorides tend to dissolve and become liquid by absorbing moisture from the air, retaining moisture and continuing to drive the corrosion reaction.

Or, in plain English – in certain conditions, once corrosion starts to occur in aluminium crevices, it actually makes itself worse – it’s what you call an ‘autocatalytic reaction’.

Conditions that lead to crevice corrosion in aluminium:

– There must be a crevice that’s wide enough to allow liquid to enter, but narrow enough both to limit oxygen diffusion and to allow some liquid to enter and stagnate.
– Moisture has to be present for an extended period. If the crevice dries out frequently, oxygen reaches the aluminium surface and the protective aluminium oxide barrier layer will reform before the corrosion reaction begins to reinforce itself. – If the crevice is sealed so that no moisture reaches it, the corrosion reaction can’t occur.
– Chlorine needs to be available from the surrounding environment in a sufficient quantity to contribute to the reaction.

Ways to prevent corrosion in crevices:

– If a crevice is wide enough, stagnation and de-oxygenation won’t occur. This can depend on building orientation, exposure to sunshine and water, and design configuration.
– Powder coating is permeable to the atmosphere, highly porous at sharp corners, and is usually only applied to visible faces, so its protective effect in severe environments can be dramatically reduced.

Recommendations to reduce the possibility of crevice corrosion:

– Use an isolation membrane between the aluminium and the sill and/or jamb.
– If you’re using applied coatings, make sure all surfaces including cuts and fixing holes are coated.
– Use effective damp courses and properly applied sealants.

– Eliminate crevices and contact points where you can. If you can’t do that, make sure there‘s enough ventilation to prevent moisture build-up.

Gary Smith is the marketing and communications manager of the Australian Window Association.