It’s time to ‘fascia’ the truth

Metal fascia has become a big component of most new home builds; however, rising material costs have meant that profits are simply no longer there. Peter Coll explains.

It has always amazed me that roofing companies are on a race to the bottom when it comes to the installation of metal fascia and gutter. Metal fascia is such a small part of every home but it is such an important link in the construction process.

Metal fascia was first introduced into the construction industry in the early 1980s and at the time a lot of people said it would never be accepted and that no one would want it. Here we are, 30-plus years later, and I would say that over 90% of all houses built today feature metal fascia.

Why? The answer is obvious: timber fascia has to be painted, repainted, and then repainted again only for it to eventually rot. Colorbond® fascia is produced with the Colorbond coating already on it and it will usually outlast the house that it is installed on.

Builders know that the fascia and gutter is a linchpin in the construction process because it is such a quick installation and most standard installations are completed in 2-3 hours, but if for some reason it doesn’t happen, you will find that it holds up everything scheduled after, including roofing, bricks, eaves, cladding etc. It is also a really important aesthetic component to most houses these days as it frames the look of the entire house.

In the early 1980s roofing companies were installing metal fascia and gutter for almost the same price they are now, around $27 per lineal metre in Melbourne, but the rollformer i.e. Stramit, Stratco, Lysaght etc. have raised their costs by 150% for the material needed.

The installation rates have also risen by roughly 150%. That’s not to mention that the overhead and taxes cost have gone up in that time. At the current rate metal fascia is the most unprofitable product being sold in the domestic building marketplace.

In 1983 the installation equation would have looked something like this: (Please See Table 1) 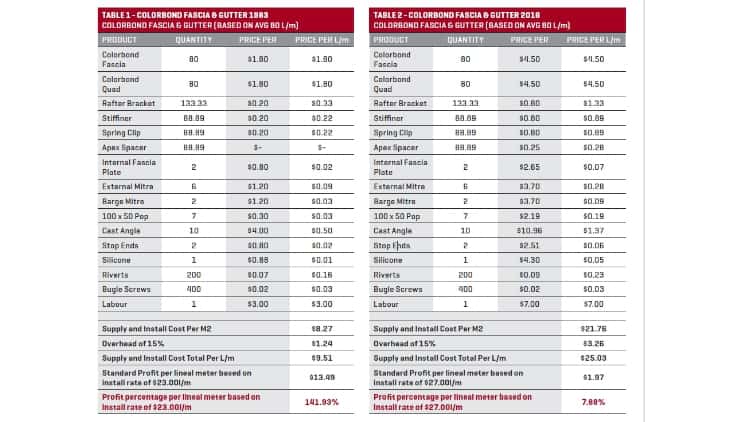 Looking at this the profit percentage is probably far too high, I would love it but I am never going to achieve it.
This is what it look like on today’s calculations. (Please See Table 2)

NOTE: these prices are taken from a quick survey of rollformer’s and from personal memory and may not be 100% accurate.

So I again ask: why have roofing companies allowed a product to become essentially profitless? I am guessing that in a large part this is competition driven. In the early 1980s there were 4 or 5 companies installing metal fascia in Victoria and they all knew each other and life was mostly amicable, but as we hit the 1990s this number would have been in the hundreds and now thousands.

As bigger national companies entered the industry with better processes and buying power, the price dropped drastically and the industry followed suit; builders became accustomed to paying less and less. The 90s also saw the growth of the “super” builders like Simonds, Henley, Metricon etc. who have now become national players and who have developed around 60% of the new smaller builders who cut their teeth at one of these companies. These guys knew what prices they were paying for products and when they moved or started on their own they expected the same rates.

The biggest issue in the southern states is the domination of the roofing industry by roof tiles. Roofers can afford to accept minimal margin on a lead in product like fascia and gutter if they also get the roofing to balance it out but no one can afford to take that kind of a hit if the roof is tile.

BlueScope has been looking at ways to raise the percentage of metal roof installs in these southern states but have been fighting a winless battle. Over the last 10 years all of the major roof tile manufacturers have tried to buy or develop their own fascia and gutter companies and these massive conglomerates with all of their resources have failed or walked away…
why? Because there is no profit in it, but we, the roofing companies, allow it to continue without raising the prices of metal fascia and gutter.

For a start, if a roofer is installing metal fascia and gutter on a house with a tile roof, the price should be 30% higher than for a metal roof and there are three reasons why:

Tiles are so much heavier and result in more maintenance
When you are doing the roof you have more visibility on the job and can rectify any issues before finishing it
Because you can.

This is what the calculations could/ should look like: (Please See Table 3)

As I write this we have just received notification that BlueScope is raising its rates again in October/ November by 5.5-7.6%. Installers cannot continue to absorb these increases and if they do, the likelihood of them becoming insolvent is very high. And to be honest, it’s very neglectful to their customers, the builder, the builder’s customer, the home owner and the industry as a whole because there are installers out there who are either unaware of this happening or cutting corners to stay profitable and installing an inferior product. When these products fail, and they will, they will not be there to fulfil the warranty and the insurance company will have to foot the bill. 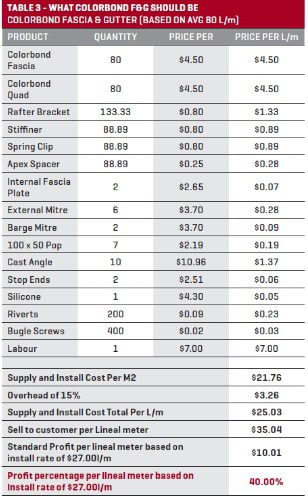 I believe that the building industry has changed so much over the last 30 years, as has the society we live in, and the product/service we deliver should be improving, rather than declining and we need to make it attractive for people to want to join our industry. It makes no economic sense to join an industry that doesn’t safeguard its own future though.

Window protection: worth the effort