Changes to the NCC have led to the need for separate sanitary compartments for disabled males and females. Tanisha Cowell from Equal Access explains why you can’t have a unisex ambulant toilet. 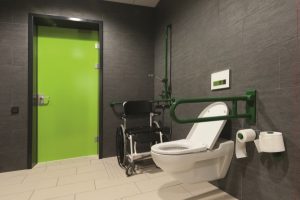 A unisex toilet is a public toilet designed to be suitable for use by both males and females, and is now often extended for use by persons of any gender, which benefits population groups who identify themselves as any identity outside the boundaries of male/female.

Here at Equal Access we often receive inquiries as to why new developments or upgrade works have triggered the required provision of single gender ambulant toilets.

Changes to the 2016 National Construction Code (NCC) Volume 1 of the Building Code of Australia (BCA) has incorporated an amendment to Part F2 Sanitary and Other Facilities. The change, specifically Clause F2.3(a), instructs the provision of separate sanitary facilities for males and females, with minimal exceptions. The provision of unisex accessible sanitary compartments (and showers) is one exception, which was also mandated in the now superseded 2015 NCC.

To acquire an understanding of why the Victorian Building Authority (VBA) promotes and regulates the provision of unisex accessible toilets we may find insight in AS 1428.2-1992, where Clause 15 regarding Sanitary Facilities notes a unisex toilet is recommended for general use by the public where a person with a disability may be accompanied by a member of the opposite sex (a carer for example).

The allowance and promotion of a unisex accessible facility within the BCA and Australian Standards, although more accepting of a non-gender specific provision, is supported only with an example of where both sexes may be required to attend the same facility at the same time. It gives no wider acceptance of a gender-neutral approach for use by transgender groups. This may explain why the NCC still insist on single gender ambulant toilets, which is a reflection upon social norms dating back to the Victorian era where segregated toilets were provided to protect privacy and safety for those most vulnerable, primarily women.

As disability access consultants advocating for accessible built environments, we believe the provision of unisex ambulant toilets enables sanitary facilities to be used by a wider range of user groups, and is a more universally designed approach with the most equitable outcome for the community.

However, the move towards unisex ambulant toilets still leaves the issue of gender inclusive restrooms to be addressed. The provision of a toilet titled ‘unisex’ presumes its occupant identifies themselves according to a gender binary – as one of two distinct and opposite forms of masculine and feminine. The out-dated notion has been raised as an equity and human rights issue for people who identify outside of this boundary, and more importantly, creates physical and emotional problems for those trying to avoid using public restrooms due to being subjected to verbal harassment and assault for using the ‘wrong’ toilet. This in turn exposes the potential for health risks ranging from anxiety and depression, to dehydration and kidney infections, which can lead to disability.

A gender-neutral toilet is an inclusive provision for use by persons of any gender, which benefits population groups who identify themselves as transgender, genderqueer, intersex (or any identity outside the boundaries of male/female).

The Disability Discrimination Act (DDA) was passed by Parliament in 1992 to contribute to attitudinal change toward people with a disability. Although the concept of gender specific toilets may not be interpreted as a disability issue per se, Section 5 of the DDA Direct Discrimination: less favourable treatment refers to a person being treated less favourably due to their disability. Additionally, Section 24 of the DDA refers to goods or services being refused to a person due to their disability. In this instance, not providing a unisex (or more favourably a gender-neutral) toilet to a person who identifies as transgender (or outside the gender binary) and requires support offered in an ambulant toilet may feel they have been discriminated against and denied the use of that facility.

Considering an overall shift from labelling ‘unisex’ to ‘gender-neutral’ accessible and ambulant toilets also requires a shift in language. Signage designed for ambulant and accessible toilets, as specified in AS 1428.1 Clause 8, should be reviewed to replace any reference of unisex signage to one that indicates a wider all-gender approach. Some current options available online are provided in Figure 1.

Gender-neutral toilets ensure access and equity is provided for all members of society, and broadens the scope from disability access to universal access, paving the way toward a more inclusive society. Governing bodies are in an optimal position to promote and advocate for universal access to public sanitary facilities, through changes to building codes. California has paved the way by requiring all single-occupancy toilets to be gender-neutral through its restroom access law (http://www.eqca.org/gov-1732/). Now is the time for Australia to follow suit, by improving building regulations and ensuring ‘Equal Access’ to all built environments are provided for not only those living with disability, but for all members of the community.

With this in mind, we believe that if a ‘Performance Solution’ was considered for a unisex ambulant sanitary facility, which we would support, the Performance Requirements would be met as in our view, unisex sanitary facilities present a solution that is better than the ‘Deemed-to-Satisfy’ requirements of the BCA.

And they said print was dead…