Enter into the newest age of technology for the building industry. Here we take a look at four different products breaking through to enhance the world of construction. Esther Rivers reports.

The progress of material science is nothing short of spectacular. Technology and development in engineering has resulted in some of the most efficient products on the market today. For the building world, this means groundbreaking tools for the development of infrastructures.

As the demand on people and industries grows, so does the need for evolving products and for better, more effective ways to produce work. Moving with ecological trends, safety practices and new equipment, engineers are producing valuable tools to aid construction. In addition to our Spring 2018 investigation, here we look at four other recent products that could positively influence the building industry.

The latest in self-healing plastics may mean a future of self-healing iPhone screens! That excitement aside, this new range of ‘smart plastic’ can ideally heal itself, as compared to plastics developed previously which cannot be fixed. This new class of plastics has microcapsules within them, which break when the plastic cracks to release two reactive substances that bind to fill the cracks. 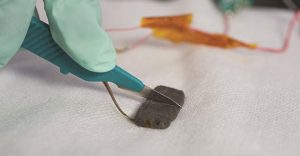 Nancy Sottos developed self healing plastics with her team at Illinois University. Nancy has developed composites that can re-heal cracks up to 30 times over, but says that safety regulations will keep us from accessing large scale repair projects, such as airplane wings, for many years yet.

Said to ‘heal like human skin’, the new self healing polymers will reportedly begin to be manufactured in 2019. Once the products are feasible for commercial use, the self-repair work on plastic products will make an enormous difference for waste reduction and work costs.

Lab work has already developed certain self-healing plastics. The Department of Material Science and Engineering professor at Clemson University Marek Urban says that his team has discovered ways to create the plastics on existing production lines.

Although there are hurdles to jump in the release of the new product, Marek says that they have now discovered how the polymers work and why, and the new mechanisms will be promising for the future work of construction industries.

Microbiologist Hendrik Jonker is responsible for the creation of self-healing concrete. By combining the concrete mix with bacteria, he produced a limestone offset. When the brick cracks and water runs through, the bacteria fuses to become limestone, growing between the spaces to repair the cracks. The cracks are repaired with the limestone within three weeks, yet the bacteria can live unaffected within the un-cracked bricks for up to 200 years. While the bacteria are dormant inside the bricks, they are within capsules to keep it contained. 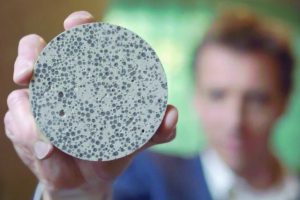 The long-lasting bacteria are found close to volcanoes in high-alkaline lakes. It feeds and is sustained by the calcium lactate that is also mixed in with the concrete (along with the  Bacillus Pseudofirmus or Sporosarcina Pasteurii bacteria).

The self-healing concrete has the capacity to protect buildings, bridges, tunnels and other concrete structures which will allow nature to flourish around it. Hendrik wanted to aid an idea that was similar to bone healing via mineralisation, and took his ideas from such. He named the product ‘bioconcrete’.

Currently less cost effective than regular concrete, Hendrik states that the calcium lactate is the expensive part, and if there is a reliable way of ascertaining the calcium property at a lower cost, there is the possibility of making the bioconcrete a more regular part of building.

Vinyl is a commonly used floor material for areas where you see a lot of foot traffic, like the kitchen or bathroom. It is durable and long-lasting and has been used in homes for some time. Engineered vinyl plank flooring, however, is an innovative progression. Breakthroughs in manufacturing and technology has seen this product develop, most notably used as a more sustainable alternative to timber planks.

“We have optimised both profile geometry and material choice to produce a long-lasting, lightweight, recyclable, chemically-inert and customisable product that is an ideal timber alternative,” says Tech Plas business development manager Andrew Swann.

“Within the Australian and New Zealand scaffold industry the use of timber laminated veneer lumber (LVL) boards is commonplace despite being utilised in environments to which they are not compatible,” Andrew says. An enormous number of impaired boards were wasted every year because of this.

“It’s a staggering amount of waste that led us to create our own industry-specific solution with sound environmental credentials.”

Being lightweight, the new vinyl plank flooring has weight savings of up to 40%. They are easier to store as they are more resistant to the weather and don’t need to be dried. With a life span of five years, designers proudly stated the efficiency in recycling the PVC flooring upon its replacement.

“After five years of use we aim to recover the used boards for recycling, thereby reducing environmental impact,” Andrew says. “Our intended recycling process leaves a clear carbon trail for sustainability.”

A doctor from the University of Melbourne is responsible for creating a new cladding that was previously thought to be impossible to make. The non-combustible, lightweight cladding core is organic, carbon based and has natural, combustible materials instead of plastics and metals and is more cost effective than using other, heavier metals. 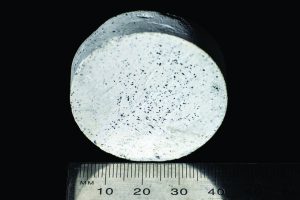 Dr Kate Nguyen of the Melbourne University innovative fire engineering group has created a heat resistant imperative to the building industry. In the face of the 2017 Grenfell tower fire and more recently the Spencer Street apartment fire just this month, it has never been more important to introduce heat resistant cladding for homes and buildings.

Dr Kate Nguyen discovered that the heat resistant ceramic particles in the outer layer of electrical cables would activate and react to each other, forming a heat resistant network within the material. She experimented with various ceramic particles and began a long journey that led, finally, to a material that could combat heat up to 750°C. Those within the building industry have been working meticulously to come up with a solution such as this one, and welcome the discovery.

The cladding feels like a dried, compact powder, the particles inside just small grey flecks. When the cladding reaches high temperatures it amalgamates with the material to become a darker grey fusion, and turns it fire resistant.

Will products work and who says so?