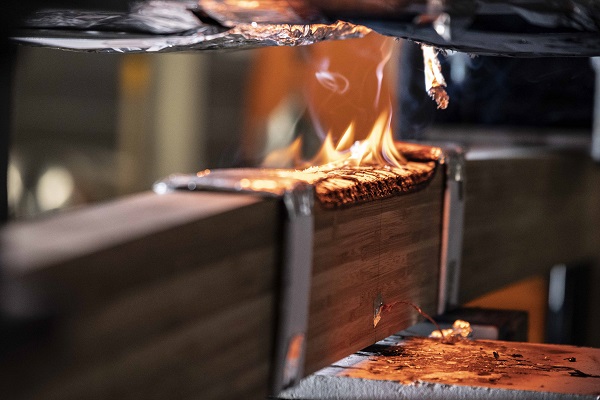 University of Queensland Ph.D. student Mateo Gutierrez suggests exploring the use of bamboo as a sustainable flooring and furniture option. However, the material isn’t a part of building regulations as of yet and cannot be used.

“Bamboo is an excellent building material because it is highly renewable and it has remarkable mechanical properties, it’s light-weight, flexible and strong,” Mateo says.

“It’s fast-growing as it is actually a grass, which increases the turnaround of harvests from timber’s 30 years to three years for bamboo poles—there are many benefits.”

After joining the University’s fire safety engineering group: UQ Fire in 2016, Mateo, a structural engineer by trade, has been exploring the performance of bamboo structures when exposed to fire.

“During testing, we found that when burning, bamboo creates a char layer that protects the inner layers that are not directly exposed to fire, which means it’s relatively hard-wearing in a fire” Mateo adds.

“Like timber, bamboo suffers a reduction in structural integrity at high temperatures, but our goal is to understand how that reduction occurs and how we can predict the failure of load-bearing elements in a building.

“We aim to develop design frameworks that can predict how bamboo buildings will fare in fires, and these could be used to inform revisions of the Australian building regulations, and perhaps see bamboo in Australian urban environments.”

Outside of fire safety, Mateo conceded that there is still room for growth in bamboo production: weak production lines, a lack of harvesting technology and the misconception that bamboo isn’t as strong or long-lasting as other materials.

Despite this, bamboo structures are already being used across the world with the Ibuku’s Sharma Springs residence in Bali and multiple designs in Colombia.

Mateo is hopeful that the construction industry will recognise the benefits of bamboo sooner rather than later: “With research advancing in the area of bamboo fire safety, bamboo buildings in Brisbane are closer than we might think.”

Housing market on the rise but home ...