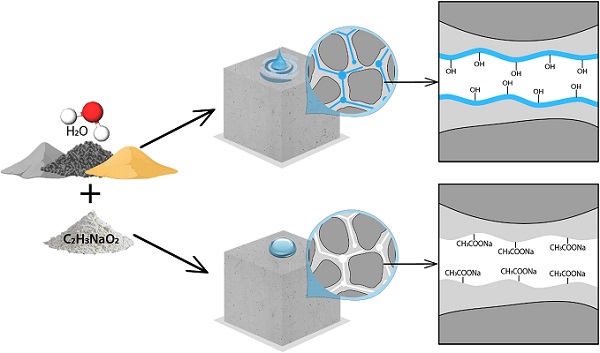 Concrete can be significantly strengthened by adding sodium acetate to the mix according to a new study by Brunel University London and Mutah University in Jordan. This has applications to cured concrete in extreme hot or cold conditions.

Where traditionally curing concrete in extreme weather conditions resulted in a weakened structure – micro-cracks in cold weather and weak bonds in warmer temperatures – the latest study has found a way to avoid these issues.

According to the study, adding sodium acetate increases the compressive strength of concrete in extremes of warm or cool climates but also reduces the amount of water the concrete absorbs.

This can potentially result in stronger structures and less ongoing maintenance.

“Sodium acetate, on the other hand, has proven its ability to preserve and even increase the compressive strength of concrete under harsh weather conditions.”

To test their ideas, the researchers produced 72 concrete cubes with varying mixes of sodium acetate, which were then cured at either -25° or +60° for seven or 28 days.

“Results showed an enhancement of 64% in compressive strength when 4% sodium acetate is incorporated within the concrete and cured under 60°,” Seyed says.

“Also, water absorption was observed to decrease by more than 79% when 2% sodium acetate is added to concrete.”

The team now hopes to test how integrating sodium acetate in concrete affects the performance and durability of concrete in the long-term.