ColumnsGreg Cheetham - Joinery
Home›Columns›Why the crisis of confidence in the building industry?

Why the crisis of confidence in the building industry?

Greg Cheetham takes a look back at where our building regulations have evolved from.

The Insurance Council of Australia says everyone just “assumed that buildings are indeed constructed to meet or preferably exceed… minimum standards1”.

That assumption is now in grave doubt given the number of high profile defective buildings being identified in recent times. The industry has been regulated for a very long time now but it seems to be falling short on meeting those minimum standards.

In 1936, 83 years ago, the NSW Government established the Uniform Standards Committee to guide its public servants who where overseeing a range of financial institutions (of the day), on what constituted acceptable domestic residential building practices.

Remember all this was before we had relevant Australian Standards or a National Building Code to guide us. The committee published a small set of standards, that was used by many of the State owned banks, building and friendly societies to help their inspectors apply the minimum acceptable standards to approve loans and progress payments.

In fact the standards booklet was an integral part of the building contracts between lenders, builders and clients. 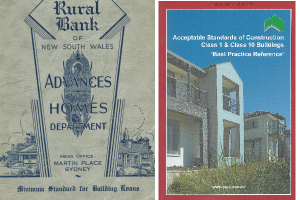 Over the years the book was given many names, such as Construction Standards, Minimum Standards and even Cottage Construction standards, depending on which financial Institution published it.

Those early booklets dealt with some very basic guidance on such things as stump and root removal, lime mortar mixes, priming timber with lead based paints and the gauge of lead flashings.

More contemporary building techniques were introduced that changed the entire nature of house construction. New materials such as asbestos cladding and linings, fibrous plaster sheets, extruded bricks and cement tiles were introduced to speed up the process of home building as the pent up demand, post-war, took hold.

The committee had to keep up with all these changes. The booklet now included sections on variations to contracts, suitable site supervision and the use of skilled labour, concrete construction, steel fixing and sarking.

In 1965 the Interstate Standing Committee on Uniform Building Regulations (ISCUBR) reached an agreement between states and territories that Australia needed a uniform set of regulations.

Finally, in the early 1970s, the committee released the Australian Model Uniform Building Code (AMUBC). It was soon realised the AMUBC was inadequate and upon review in 1979, the Australian Uniform Building Regulations Coordinating Council (AUBRCC) was formed and the first national BCA was developed and finally released in 1988 with a focus on building performance, as it is today.

In 1971 the NSW Government also introduced the Building Licensing Act requiring all builders to be licensed from 1972. More construction trades, including plumbing and electrical, were added to the licensing regime over ensuing years. The Builders Licensing Board (BLB) was also established to act as watchdog over the home building industry.

During this period, the Acceptable Standards of Construction Committee (ASCC) remained relevant, especially to government bodies such as the NSW Department of Housing and NSW department of Co-Operative Societies.

The committee continued its works and publications, strongly supported by government.

The committee was also accepted as a member to the Standards Association of Australia technical committee, the predecessor of Standards Australia.

The committees work was not just about producing books on acceptable standards in the construction industry but, at times, they were asked for advice and endorsement of new products, processes and materials.

As an example that today may seem a derisible, the committee was asked in 1988 to endorse gypsum plasterboard for external applications. The request was denied.

In other scenarios, the committee refused to endorse products but, “raised no objection” to their use, “subject to… conditions”.

With all these developments going on, it soon followed that the lending institutions felt less need to initiate their own building inspection programs and stopped inspecting properties as rigorously as before, instead relying on council inspectors and the Builders Licensing Board (later to become the Building Services Corporation) to manage building defects and complaints and contractual disputes. Building Services Corporation was finally taken over by NSW Fair Trading.

In 1998 private certifiers were approved to conduct building inspections, supported by a certification regime in 2005 managed by the Building Professionals Board (BPB). The BPB was responsible for investigating any complaints against certifiers and improving professional practice through education and training among other things.This further eroded the role of lenders to manage the risks associated with their building investments.

In the late ’80s the NSW Government decided to withdraw from the ASCC, handing over the Committee and the booklet to honorary members who represented on the committee. In 1996 the committee decided to incorporate the association and since then ithas faithfully continued to develop and deliver the book for the building industry as a not for profit business.

Today the primary role of the committee is in education. Educating and guiding building practitioners, (trades and professionals) and consumers on what constitutes acceptable building practices, based on the current building codes, performance requirements and standards.

The books, covering Class 1 and 10 buildings, have been greatly expanded since its early inception, now covering many of the major construction materials and practices and includes sections on advice on building in bush fire prone areas, energy efficiency, landscaping. They also have their own engineered Timber Framing Sizes and Spans Tables.

The books provide plain English interpretations of many of the codes and standards on better than the minimum performance standards. The content is supported by many diagrams and span tables.

Given the recent negative publicity given to the building industry, with the use of non compliant products, poor construction oversight and substandard workmanship, the work of the ASCC is more important than ever before!

There will be new editions dealing with some of the more current issues like using imported building products and roofing materials along with updates as required from the recently released National Construction Code 2019.

The book is being used by builders, TAFE’s, universities, valuers, architects, engineers, building certifiers and consumers to help maintain a high standard of building practice across the country.
NSW has just employed a new Building Commissioner, Dr David Chandler, who has over 40 years experience in construction.

He is there to address and remedy the problems that have developed over the last two or three decades, particularly in the high rise residential sector. We wish him every success in the challenges ahead!

The committee believes the construction industry needs much closer oversight applied to all classes of building construction. There are many professional entities and qualified trades constructing a building, but if there is poor on site co-ordination, supervision and inspection, the linkage in the chain is broken, as is the standard of the building affected in perpetuity or even total structural failure.

To this end the honorary members of the Acceptable Standards of Construction Committee and the publication relative to Class 1 and Class 10 buildings, but with a qualified interest in high rise development, will remain relevant in terms of highlighting building standards and prudent building practice. The committee’s publications are available from the Acceptable Standards of Construction Committee website.