There are currently over two million houses in Australia with a grid connected solar (photovoltaic) system on their roof and interconnected to the grid. There are approximately 6,000 electricians accredited by the Clean Energy Council to install these systems. These “solar electricians” have been trained in the safe installation and operation of these systems.

This guide and associated short course have been developed by GSES Australia to inform other tradespeople how to work safely near existing solar systems.

While a few systems were installed in the 1990s it has generally been since the introduction of the Photovoltaic Rebate Program (PVRP) in 2000 that domestic and commercial solar systems started being installed on buildings throughout Australia. Over the last ten years growth has resulted from various state government feed-in tariffs and also due to sale of renewable energy certificates in meeting the target of 33,000GWh of renewable energy on the grid by 2020. Figure 1 shows the growth in installations over the last ten years. 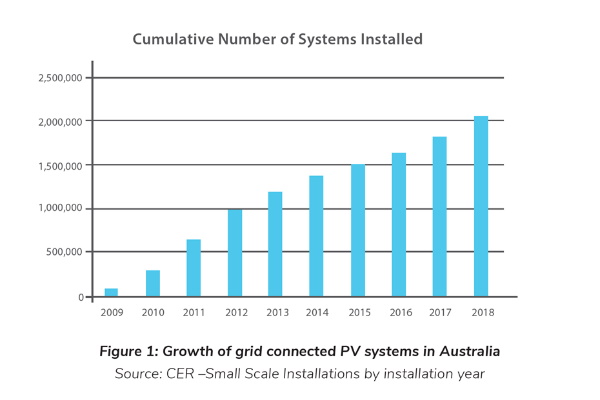 Over the last 20 years standards have been developed to allow for the safe installation of these systems; however, these standards have been updated regularly to reflect changes required due to the rapid changes and growth of the industry. The result is that a system installed in 2000, that is still operating, will have been installed differently to what is being installed today. Some of the differences will be the type of cable that has been installed between the solar array and the inverter (the inverter converts the solar power to a.c. power that feeds into the building and onto the grid), the number and type of switch disconnectors (isolators), the signage and whether the solar array has been bonded to earth.

For all tradespeople it will be important to be aware of where the solar array is installed, where the inverter is installed, the associated cabling between the array and inverter and the associated switches/isolators. Electricians who have not undertaken solar training need to appreciate that a grid connected solar system is a separate generation system in parallel with the grid and that cables associated with the system must only be used for the interconnection of the grid connected PV system: they must not be used for any other electrical connection.

Uninterruptible power supplies have been used for back-up power supplies for specified loads (e.g. computers) for many years. In recent years larger battery systems have been installed in houses and commercial/industrial premises to work with grid connected solar systems.

These battery systems are being used for storing excess solar generation during the day for use at the evening and in some instances as a backup system if the grid has a failure. This guide also shows how to identify if a battery energy system is installed at the building the tradesperson is undertaking work and how to safely shut it down if required.

Note: This guide contains photos of systems from installations over the years to show what a tradesperson might find when working on a building with a solar system installed. In some photos the actual installation shown might not be compliant with the current standards or even those at the time of installation.

4 advantages for businesses investing in vehicles ...