A new Toyota Huski 5SDK8 skid steer loader is the engine behind an enrichment program for the Trail of the Elephants exhibit at Melbourne Zoo. 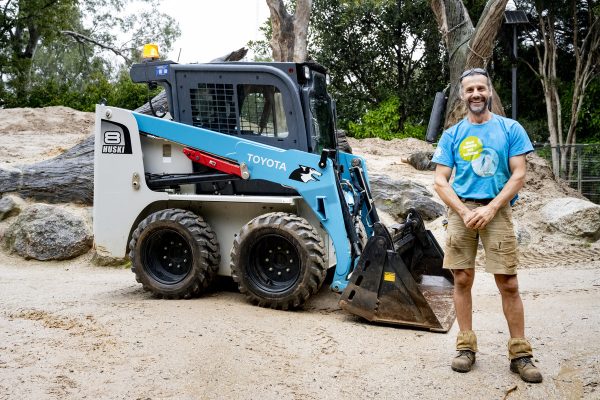 Zoos Victoria partnerships manager Daniella Jong says the work is part of an enrichment program at Zoos Victoria, which includes keeper Chris Lekos who is part of the passionate elephant team providing environmental changes for the elephants, both inside their night-barn and outside in their paddocks.

“Elephants are such intelligent creatures and Melbourne Zoo’s keepers are regularly making changes to their environment to keep them physically and mentally stimulated,” says Daniella.

The Huski skid steer loader allows large volumes of enrichment materials to be moved in and out of the Trail of the Elephants.

For example, the Huski is used to regularly refurbish the elephants’ night-den by moving huge amounts of coarse sand into mounds, which the elephants love to play on.

“It is an absolute pleasure to supply a new Toyota Huski to help build new enrichment at the Trail of the Elephants exhibit at Melbourne Zoo,” Thomas says.

“Elephants are, obviously, large animals, requiring both big and small enrichment activities and TMHA is proud to be able to be a part of their care within Zoos Victoria, an organisation that does so much to promote conservation efforts around the world.”

Thomas says the Zoo already had a Huski skid steer loader but it is used for a different purpose on the other side of the Zoo.

“Melbourne Zoo exclusively uses Toyota Huski skid steer loaders but their earlier model was used in the recycling section of the Zoo – they recycle all their food waste and compost it. This contributes significantly to them achieving the Zoo’s carbon neutrality – having a net-zero carbon footprint.

“But if they wanted to use their older Huski in a different part of the Zoo, such as the elephant exhibit, they firstly had to wash it right down and then move it all the way across to the other side of the Zoo, do what was required, and then take it back again. So it was much harder to utilise.”

With the additional Huski working mainly in the elephant exhibit it will get used every day, or every second day, and also be available to work in other sections of the Zoo without having to be cleaned down.

Thomas says that TMHA extended itself to the Zoo when first approached to assist: “The Zoo came to us and said: ‘this is our fixed budget’ and these are our requirements so we had to work quite hard to make it a reality.

“Basically, their budget only stretched to a base model but they needed a lot of extras and that’s where we were able to find a solution to get the best deal possible for them.

“We went through all our suppliers and they really supported us. Everyone came together to make it happen, which was a great feeling of accomplishment.

“The Zoo needed an enclosed cabin with air-conditioning, heating and a HEPA filter fitted by Breathe-Safe, because of the dusty environment and OH&S considerations. A reverse camera is fitted for additional safety in tight operating areas. The 4-in-1 Bucket is from Norm Engineering and fitted with a straight cutting-edge, and a spare wheel was supplied by Bearcat Wheels and Tyres.

“All of our suppliers jumped at the chance to support Melbourne Zoo and play a small part in their great conservation efforts.”

Thomas emphasises that, on a personal note, he particularly enjoyed his involvement in the project.

“I’ve got a passion for animals that extends to their care in private and professional situations. So it was great to be able to connect with the customer on a personal level and help them help the elephants – it was a ripper job.

“I think it’s quite common for people to underestimate how highly intelligent elephants are. They are very curious, so it’s important that they are stimulated in different ways, every day.

“The Huski comes into play because everything to do with elephants is big and heavy. The 5SDK8 is ideal for creating fun and comforting objects for them. Their sleeping mounds, for example, are really important. The keepers use the Huski to build these big piles of sand and they play with them, and by the morning they’re all knocked-down. They love doing that.

“Another one they love is dropping a big lump of clay with the Huski and wetting that down into a bog-hole. The elephants will play in that all day long.

“It was really cool to help such majestic animals, even indirectly.”