A fleet of Toyota forklifts is at the heart of a thriving waste-recycling centre at Sydney Markets. 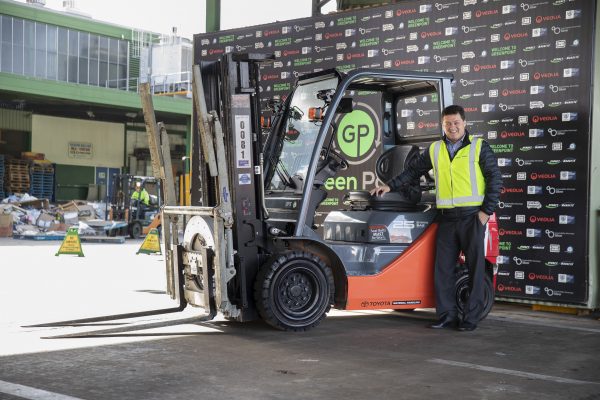 Sydney Markets veteran of 22 years and Green Point Facility Environment Manager, Con Kapellos, said that since the recycling centre’s inception, a dramatic reduction in landfill waste has been achieved. “Back then we were only recycling about 17 percent of our waste. Most of it was going to landfill,” says Con.

“There wasn’t much impetus to recycle, then. But we changed our strategy to focus on our main waste-stream, which is organic food and get it out of landfill. Then we looked at packaging such as cardboard, timber pallets, plastics and polystyrene,” he says.

“We are up to about 70% recycling at the moment and we continually strive to improve. If we continued what we were doing before we started in 2005, it would have cost our business $35 million in waste going into landfill. So that’s how economically important our recycling system is.

“We also are very proactive with managing our waste streams. For example, we process polystyrene boxes on site and sell them into Korea as solid bulk material which they make interior building products out of, such as cupboards and architraves, etc.”

“We request that the market’s tenants give us their food waste already separated and we examine it to decide if it’s clean and fit for human consumption,” says Con.

“If so, we give it to Foodbank who pass it on to the needy which is a win-win situation for all.

“Also, some of our organic waste goes freely to farmers for stock-feed, and we’ve been doing that since day one. The balance of the organic waste is sent to Earthpower, which is an anaerobic digestion facility located at Rosehill, who convert green waste to energy and a fertiliser product.”

Toyota forklifts form the majority of material handling equipment at Sydney Markets, Flemington. Mr Kapellos estimates that: “About 70-80% of the forklifts on our site are Toyotas which we source from Toyota Material Handling Australia.”

With such an enormous amount of Sydney Markets tenant’s forklifts working every day on-site, safety is a paramount concern.

“You’re working in a place with about 1000 forklifts and the biggest risk is the forklift’s safety,” says Con.

“Of course, we fear any injuries or, worse, fatalities.

“Toyota’s System of Active Stability (SAS) system is very good for stability and it minimises risk factors such as tipping for our operators. So, Toyota’s SAS feature is extremely important and it’s a big reason that we buy their forklifts.

“We at the markets are the landlord, so safety is absolutely important on-site. We strive to set the best examples for our tenants by leading the way with best safety practices.

“We have to make sure we operate our forklifts in the safest way and we do that by showing our tenants that we’re driving Toyotas with stability control.

“We’re also going to install speed-limiters that are linked to a GPS on our latest Toyota Forklift, which when programmed will automatically slow the forklifts to 10 kilometres within certain areas on site. We already have been trialling the speed limiter on another of Toyota Forklifts for the past two years and found it to be very beneficial.”

Toyota Material Handling Australia (TMHA) area sales manager, Michael Tsougranis, explained that Toyota’s exclusive SAS is the first system in the world to monitor and control forklifts through a combination of advanced sensors linked to an on-board controller, enabling assured load-handling performance and, therefore, safety: “SAS is an absolute cornerstone of the Toyota Advantage,” says Michael.

“SAS is vehicle stability control systems in that it significantly contributes to accident-prevention by detecting motion during operation. The SAS computer constantly analyses the potential for a tip-over. If the SAS detects tip-over potential, it sends a signal to the Active Control Rear Stabiliser, which then minimise tip-over potential.

“The SAS safety measures are based on the fact that the stability of a forklift changes constantly due to shifts in the balance of the load, coupled with the speed and turning-rate of the forklift.”

Con says Green Point has been constantly expanding and improving its system of work, and its Toyota forklifts have been central to its operations, since its opening.

“We used Toyota forklifts from the beginning and have only ever used their forklifts. We borrowed our first one back in 2005 and the resulting figures spoke for themselves.

“We realised we needed to grow. We need forklifts that are efficient, productive and safe, so we expanded our fleet and currently have six Toyotas. They are real workhorses for us, so we have never used any other brands.

“They are reliable even though they are worked hard. We move many tonnes of waste, seven days a week. They are probably the hardest working forklifts on site at the markets. They are very efficient forklifts and they don’t let us down.

“Some of our forklifts are five or six years old and they are still on-deck, so they have proven to be very durable. We don’t have any issues with them. You might get the occasional hydraulic hose that busts but that’s just because of the high workloads we have for them. That’s nothing major. We’re very happy with them.”

Mr. Kapellos says Green Point continues to innovate in order to improve its material handling procedures: “We have made some variations for our business over the years to assist with our operations. Some of the Toyota forklifts have rotating attachments which are powered by the forklifts. The attachments clamp onto a cardboard bin and flip it over 180 degrees and drop organic waste into a larger bin without losing the cardboard container.

“The method we were using previously wasn’t very effective, so that modification has been very efficient. It has boosted our recycling capacity and reduced our required manpower.

“Beforehand, if you wanted to empty a bin out, you had to do it manually with a shovel and it would take about 15 minutes. But now with the rotator, the forklifts can do it in seconds. So, it saves a lot of time and money and it also allows us to re-use cardboard bins that are retained on the rotator after being emptied. We might get to re-use a new cardboard bin another 10 times so that’s really good.

“We also have one of our Toyota forklifts that has adjustable tynes that can go wider or contract, depending on the size of the pallet.”

“I operate the Toyota forklifts myself and I enjoy the new machines, which continually become more efficient, comfortable and safe. My team enjoy them, too, because they get more functional and stronger. You can drive them hard, every day. We’ll be will be sticking with Toyotas for as long as I’m here at Green Point.”