The next thousand years: an inconceivable idea? 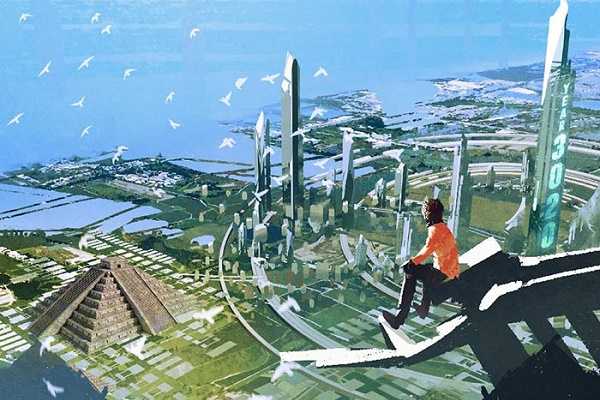 Only its nose sticks out where it lies blanketed in thick, white snow: the Svalbard Global Seed Vault in Norway. Carved into virgin solid rock of a permafrost mountain, it is said to be the most important room in the world. Containing a complete ‘backup’ of earth’s food-crop seed at the time of its inauguration in 2008, this beautiful bunker was designed to last a thousand years and withstand nuclear bombs, global warming and projectile weapons. The entrance is marked by a gem-like installation made from stainless steel and mirrors that reflect the midnight sun in the summer months and fibre-optic lights during the polar night. Aptly named Perpetual Repercussion, it is a visual representation of the jewels within.

This is unusual. We don’t often think about how our designs, businesses and purpose will impact our descendants a thousand years from now. Thousands of years are for myths, legends and mysterious things like the pyramids.

Buildings now are much more likely to be demolished with new structures built in their place. The average lifespan of a US S&P 500 company has fallen by 80% (67 to 15 years) in the last 80 years, and ‘start-up’ has entered our vernacular for a reason.

So, why do we think short-term when we are building structures and companies, and is there value in taking a longer-term view? Did the chief executives of the S&P 500 companies that no longer exist plan it to happen or did they embark, unintentionally, on a course of short-term thinking that resulted in their demise? What can boards and chief executives learn from building structures which have lasted 1000 years, and how can they take this same kind of thinking into their planning for permanence but built with adaptability?

Why, and for whom, we build has changed

You can see how we got into the habit of building structures with a faster use-by date. Previously, buildings were built for greater longevity with some bridges and churches across Europe that are still in service dating back 500 years. The historic structures built by empires and religious organisations were likely a result of long-term thinking.

That trend dissipated with the rise of consumerism which has manifested across built and commercial environments. Landmarks are continuously razed for newer and shinier designs, with the average design life for a bridge or building now 100 years if you’re lucky (300 years in very forward-thinking cases such as Brisbane’s Gateway Bridge).

Today, similar trends have penetrated the building of corporations. The significant upheaval of the Fourth Industrial Revolution has wreaked havoc across industries and exposed the vulnerability in many an organisation’s business plan. Governments too are thinking in short-term election cycles. Indeed, many countries are less than 50 years old and 76% of UK FTSE 100 companies have disappeared in the last 30 years.

Trying to predict and anticipate what society will need or want years from now is challenging but not impossible – it’s just hard. Research into the success of organisations that have thrived for more than 100 years – known as Centennials – found consistent lessons across all the organisations. All centennial organisations studied were incredibly strategic, looking 20 to 30 years ahead to understand how society is evolving, how they can shape it and how they can get the talent to do this. One of the biggest challenges, when companies adopt a five-year horizon and strategy plan, is their focus remains too narrow and neglects to take in the bigger picture.

One might ask why a team of engineers would build a clock in the Texan desert with a design life of 10 000 years? Because it’s about changing the way people think. It is about getting them to consider future generations. Caring for the present while being a custodian of the future and becoming better ancestors. Perhaps we won’t be building 4500-year-old monuments like the great pyramids, but we also can’t solely focus on the next 10 years and turn a blind eye to collateral damage.

Even impressive skyscrapers are on average built to last a mere 50 years. But some examples boldly operate in completely different time frames. The Sagrada Familia basilica in Spain has been in construction for more than 100 years, much longer than most infrastructure will last. On the subject of the extremely long construction period, architect Antoni Gaudí simply remarked: “My client is not in a hurry.”

The Maitreya Buddha project in India is setting out to construct the world’s highest Buddha statue designed to last a thousand years. And Japanese tech giant, SoftBank Group, has a 300-year business plan to take AI far into the future.

It’s no surprise that agility, innovation and responsiveness have become the holy grail of businesses in recent times. And who can blame them, given the fast-paced environment we operate in?

But does newer constitute better? Are we sacrificing quality in the pursuit of speed? In the past, permanence was the ideal. Nowadays, the economics of permanence are being replaced by the economics of transience, and advancing technology makes it cheaper to replace and adapt than to repair.

For successful centennial organisations, both success and growth at the same time makes them nervous. A recent study of all centennial organisations in the world found that 89% employed fewer than 300 people and they deliberately stay small to ensure that standards don’t slip. Success also generates obsessing over details and analysing anything that might affect performance.

As shared by the Royal Shakespeare Company: “We get nervous if more than 20% of our new ideas succeed – it means they’re not really new!”

And NASA spent two years debriefing a mission to understand what really happened.

While technology continues to advance, resulting in greater improvements at ever shorter intervals, the answer lies in creating buildings, and companies, capable of multiple refits to extend their operational life, but also retain their culture and preserves their original purpose.

How realistic is this?

Yet, how do we even begin to imagine the year 3020 (especially with how 2020 is turning out so far), let alone design for it?  How possible would it have been 1000 years ago to predict the disruption that COVID-19 would cause, or traffic congestion when cars didn’t even exist?

The truth is nobody can accurately predict what will happen thousands of years from now, but what we can be certain of is that if we want our building structure, or our business, to last for 1000 years then it better be designed to face an adversity by adapting, flexing and refitting. The design life of projects lies not only in the technical design aspects but also in their meaning and purpose for the community. The same applies for a business.

Seeds are the promise of a future, rooted in the past, safely cocooned in the present. Will today’s ideas bear fruit in the next generations? Even if we don’t live in a world of permanence, we plan our buildings and our corporations with the mindset that everything we do can have a perpetual repercussion echoing throughout all generations. Besides, what chief executive or structural engineer doesn’t like the idea of building a masterpiece that future generations will gaze at in wonder and ask: “How did they do that?”